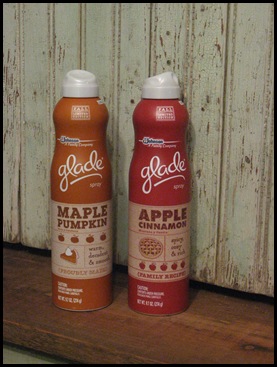 Hubby was at Walmart in Maryville, Missouri, (best Walmart I’ve ever been in by the way) he went down to help Doug get moved back in at college and he said he noticed a display of seasonal glade spray. He saw the Maple Pumpkin and Apple Cinnamon and thought immediately that it screamed “Mindy” (He knows my favorite smells) so he brought them home to me.  I didn’t know about them until later in the evening I am sitting in the living room and I smell this wonderful aroma, I keep thinking I’m imagining it.  Finally I asked Rusty what that smell was and he told me about these sprays he had got.  Oh my gosh, the Maple Pumpkin smells awesome! The whole world should smell like that! Ok, maybe not the whole world but at least my world! The Apple Cinnamon smells good too, but I want to buy some stock in the Maple Pumpkin! If I come across some more, I’m loading up!  I probably shouldn’t even be sharing this with you cause I don’t want you to make it to a store first and buy them out from under me! ;-)  Ok, You can get some, one can, maybe two, but just be sure to leave a bunch for me!

Posted by Raymond Homestead at 3:32 PM