Did not want to see the snow today, yuck yuck!! What are you going to do? We went to Shenandoah to get some groceries and we had to order Doug’s tux for prom. Jake already ordered his the other day. Before we went home I thought I would stop in Earl Mays and see if they had any wheatgrass because as I said in a earlier post I wanted to put some in a pot for a centerpiece. So here I trot into Mays looking forward to the neat little plan I got going on in my head. The gal says can I help you and I’m like yeah, I would like some wheatgrass so she takes me over to where some seed packets are and shows me this big tall stuff that you put outside. I said no that’s not it, do you have something you could look it up in? (I myself, was thinking of a computer) She says well, no but I’ll ask someone. So she goes and asks this man that looks to be the manager and he says, hmmmmm…..I don’t think we do,  wow, I just don’t know anything about it. That’s a question I am just stumped on.

Ok, well I was just wondering. Thanks anyway. Another dream melted before my eyes. I’ll just go home and get on my computer and look it up myself which I did and wheatgrass does exist! You see it all the time in decorating magazines.  Well, I will succeed in my centerpiece plan and you all will be the first to witness it when I do!  Meanwhile, I saw the following done on a website and thought it was a cute idea so I played around with it this afternoon. Amazingly, I found what I needed for it at Walmart. 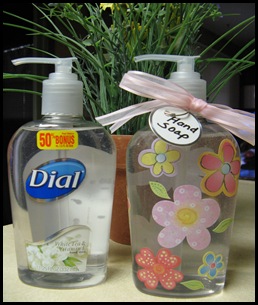 You just buy a bottle of soap, take off the label and then decorate it with stickers, rub ons or whatever. That would make a cute gift! Of course my boys would say, “Yeah mom, like people are going to want soap for a present!”  Well, I like all that kind of cute girly stuff so don’t ever be afraid to buy me any!!!

Posted by Raymond Homestead at 7:23 PM