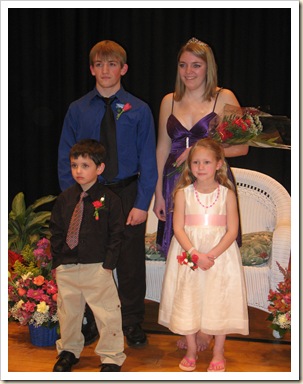 Well we just made it home from the Music Carnival. Rusty ran the basketball shoot and I did the Poster ring toss. I also had to make a cake for the cake walk. Usually it is so hot in the gym but this year it was much better than usual. Then after the games were over they had the cake auction and then after that they had the coronation. Doug was a sophomore attendant and Jake was a king candidate. Then came the big announcement. The 2009 Music Carnival King and Queen is JACOB RAYMOND and Sarah Brennan!! How exciting!!! Of course I had to go take pictures along with the other parents and Jake was not liking the photo shoot thing but I managed to get some good pictures! 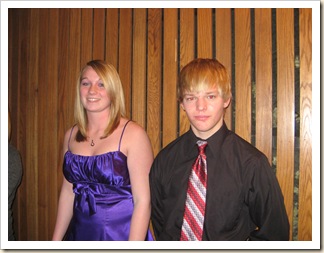 Doug and his girlfriend Megan
Posted by Raymond Homestead at 10:34 PM